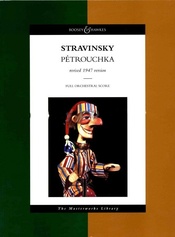 Petrushka begins with a festive orchestral introduction based, in part, on historical Russian street-hawkers' cries. The curtain rises to reveal St. Petersburg's Admiralty Square during the 1830s. The stage set (also by Benois) depicts several hucksters' booths, a ferris-wheel, a carousel, and (upstage center) a puppet theater. A crowd has gathered for the Shrovetide Fair (known as Maslenitsa), the carnival (analogous to Mardi Gras) preceding Lent.

In Fokine's original choreography, a group of Drunken Revelers emerges from the crowd, dancing to Stravinsky'...
First Tableau: The Shrovetide Fair

Petrushka begins with a festive orchestral introduction based, in part, on historical Russian street-hawkers' cries. The curtain rises to reveal St. Petersburg's Admiralty Square during the 1830s. The stage set (also by Benois) depicts several hucksters' booths, a ferris-wheel, a carousel, and (upstage center) a puppet theater. A crowd has gathered for the Shrovetide Fair (known as Maslenitsa), the carnival (analogous to Mardi Gras) preceding Lent.

In Fokine's original choreography, a group of Drunken Revelers emerges from the crowd, dancing to Stravinsky's adaptation of the folk-tune "Song of the Volochobniki" ("Dalalin' Dalalin'" from Rimsky-Korsakov Op. 24 No. 47).

Suddenly, the festive music is interrupted by strident brass announcing the appearance of the Master of Ceremonies on the balcony of his booth. The equivalent of a carnival "barker", he boasts of the attractions to be seen within.

The squeaks of a street-organ are heard (clarinets and flutes) as an Organ-Grinder and Dancing Girl emerge from the crowd, which at first pays little attention as the barker continues to shout. The Dancer moves downstage and begins to dance to another Russian folk-song, "Toward Evening, in Rainy Autumn", while playing the triangle.

At the other end of the stage, a second Dancing Girl appears, accompanied by a music box (suggested in the orchestra by the celesta). The two Dancing Girls compete for the crowd's attention to the strains of a ribald French music-hall song about a woman with a wooden leg: "Une Jambe de bois". Both tunes are repeated.

The Drunken Revelers return (again to the "Song of the Volochobniki") interrupted several times by the Barker's boasts. The street-hawkers' cries of the very opening are heard once more.

Suddenly, two drummers summon the crowd to the puppet theater with deafening drumrolls. The Magician (sometimes called the "Charlatan") appears to mystical groans from the bassoon and contrabassoon. When he has everyone's attention, he produces a flute and begins to play a long, improvisatory melody. The curtain of the puppet theater rises to reveal three puppets hanging on the wall: the Moor, the Ballerina, and Petrushka. When the Magician touches them with his flute (to chirps in the orchestra), they seem to awaken.

The astonished crowd watches as, with a wave of the Magician's hand, the three puppets begin a vigorous Russian Dance (based on two more Russian folk-tunes: "A Linden Tree Is in the Field" and "Song for St. John's Eve").

In Fokine's masterly choreography, they first begin to move their feet (while still hanging on the wall), then burst forth from the puppet theater into the midst of the crowd. The Moor (resplendent in turban and exaggerated pantaloons) is swashbuckling. The Ballerina dances perpetually en pointe. Petrushka, on the other hand, is wooden and awkward. It becomes apparent Petrushka loves the Ballerina; but she has eyes only for the Moor. The Magician calls the dance to a halt; the curtain falls rapidly.

Although Petrushka's room is inside the puppet theater, the Benois design is fantastical, portraying the night sky with stars and a half-moon; abstract icebergs (or snow-capped mountains), and a prominent portrait of the Magician.

Drumrolls announce the beginning of the Second Tableau. Without an Introduction, the music begins menacingly. "A foot kicks him onstage; Petrushka falls..."

As Petrushka gradually pulls himself together, we hear a strange arpeggio in the clarinets: this is the famous "Petrushka chord" (consisting of juxtaposed triads of C major and F♯ major). Petrushka gets to his feet (although shakily) to the accompaniment of waves of arpeggios from the piano (revealing the music's origins in Stravinsky's Konzertstück). The "Petrushka Chord" returns, now violently scored for trumpets, marked in the score "Petrushka's Curses", directed at the portrait of the Magician.

The music turns lyrical as Petrushka falls to his knees and mimes (in turn) his self-pity, love for the Ballerina, and hatred of the Magician.

The Ballerina (still en pointe) sneaks into Petrushka's room, at first unnoticed. As soon as Petrushka sees her, he begins a manic, athletic display of leaps and frantic gestures (although he was barely able to stand before she arrived). Frightened by his exuberance, the Ballerina flees. Petrushka falls to the floor to the mocking of the clarinets.

Another passage of arpeggios for piano grows into a second round of curses directed at the Magician, again represented musically by the "Petrushka Chord", this time scored for full orchestra.

For just a moment, Petrushka peers out of his room at the crowd assembled in Admiralty Square (Stravinsky provides a brief reference to the "crowd music" of the First Tableau). Then, Petrushka collapses as we hear a taunting reprise of the clarinets playing the "Petrushka Chord", followed by an odd trumpet call signalling "blackout, curtain."

As before, drumrolls link the Third Tableau to its predecessor (in the 1911 score, Stravinsky directs that this drumroll should be omitted in concert performance). In sharp contrast to the darkness of Petrushka's Room, the brilliant colors of the Benois design for the Moor's Room evoke a romanticized desert: palm trees, exotic flowers, sand.

In Fokine's choreography, the Moor reclines on a divan playing with a coconut. He then jumps to his feet and attempts to cut it with his scimitar. When he fails he believes that the coconut must be a god and proceeds to pray to it.

The Charlatan places the Ballerina in the Moor's room. The Ballerina is attracted to the Moor's handsome appearance. She plays a saucy tune on a toy trumpet (represented by a cornet in the original 1911 orchestration) and then dances with the Moor in a waltz (the themes taken from Joseph Lanner's Op. 165 No. 1 and Op. 200 No. 1).

Petrushka finally breaks free from his cell; he interrupts the seduction of the Ballerina. Petrushka attacks the Moor but soon realizes he is too small and weak. The Moor beats Petrushka. The ballerina faints. The clown-puppet flees for his life, with the Moor chasing him, and escapes from the room.

The fourth and final scene returns to the carnival. Some time has passed; it is now early evening. The orchestra introduces a chain of colourful dances as a series of apparently unrelated characters come and go about the stage as snow begins to fall. The first and most prominent is the Wet-Nurses' Dance, performed to the tune of the folk song "Down the Petersky Road". Then comes a peasant with his dancing bear, followed in turn by a group of a gypsies, coachmen and grooms and masqueraders.

As the merrymaking reaches its peak, a cry is heard from the puppet-theater. Petrushka suddenly runs across the scene, followed by the Moor in hot pursuit brandishing his sword, and the terrified Ballerina chasing after the Moor, fearful of what he might do. The crowd is horrified when the Moor catches up with Petrushka and slays him with a single stroke of his blade.

The police question the Charlatan. The Charlatan seeks to restore calm by holding the "corpse" above his head and shaking it to remind everyone that Petrushka is but a puppet.

As night falls and the crowd disperses, the Charlatan leaves, carrying Petrushka's limp body. All of a sudden, Petrushka's ghost appears on the roof of the little theatre, his cry now in the form of angry defiance. Petrushka's spirit thumbs its nose at his tormentor from beyond the wood and straw of his carcass.

Now completely alone, the Charlatan is terrified to see the leering ghost of Petrushka. He runs away while allowing himself a single frightened glance over his shoulder. The scene is hushed, leaving the audience to wonder who is "real" and who is not.
显示全部