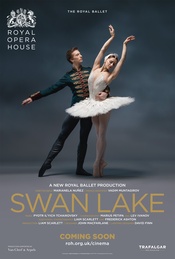 Some productions include a prologue that shows how Odette first meets Rothbart, who turns Odette into a swan.

Some productions include a prologue that shows how Odette first meets Rothbart, who turns Odette into a swan.

A magnificent park before a palace

[Scène: Allegro giusto] Prince Siegfried is celebrating his birthday with his tutor, friends and peasants [Waltz]. The revelries are interrupted by Siegfried's mother, the Queen [Scène: Allegro moderato], who is concerned about her son's carefree lifestyle. She tells him that he must choose a bride at the royal ball the following evening (some productions include the presentation of some possible candidates). Siegfried is upset that he cannot marry for love. His friend Benno and the tutor try to lift his troubled mood. As evening falls [Sujet], Benno sees a flock of swans flying overhead and suggests they go on a hunt [Finale I]. Siegfried and his friends take their crossbows and set off in pursuit of the swans.

A lakeside clearing in a forest by the ruins of a chapel. A moonlit night.

Siegfried has become separated from his friends. He arrives at the lakeside clearing, just as a flock of swans land [Scène. Moderato]. He aims his crossbow [Scène. Allegro moderato], but freezes when one of them transforms into a beautiful maiden, Odette [Scène. Moderato]. At first, she is terrified of Siegfried. When he promises not to harm her, she explains she and her companions are victims of a spell cast by the evil owl-like sorcerer Rothbart. By day they are turned into swans and only at night, by the side of the enchanted lake – created from the tears of Odette's mother – do they return to human form. The spell can only be broken if one who has never loved before swears to love Odette forever. Rothbart suddenly appears [Scène. Allegro vivo]. Siegfried threatens to kill him but Odette intercedes – if Rothbart dies before the spell is broken, it can never be undone.

As Rothbart disappears, the swan maidens fill the clearing [Scène: Allegro, Moderato assai quasi andante]. Siegfried breaks his crossbow, and sets about winning Odette's trust as the two fall in love. But as dawn arrives, the evil spell draws Odette and her companions back to the lake and they are turned into swans again.

An opulent hall in the palace

Guests arrive at the palace for a costume ball. Six princesses are presented to the prince [Entrance of the Guests and Waltz], as candidates for marriage. Rothbart arrives in disguise [Scène: Allegro, Allegro giusto] with his daughter, Odile, who is transformed to look like Odette. Though the princesses try to attract the prince with their dances [Pas de six], Siegfried has eyes only for Odile. [Scène: Allegro, Tempo di valse, Allegro vivo] Odette appears (usually at the castle window) and attempts to warn Siegfried, but he does not see her. He then proclaims to the court that he will marry "Odette" (Odile) before Rothbart shows him a magical vision of Odette. Grief-stricken and realizing his mistake, Siegfried hurries back to the lake.

Odette is distraught. The swan-maidens try to comfort her. Siegfried returns to the lake and makes a passionate apology. She forgives him, but his betrayal cannot be undone. Rather than remain a swan forever, Odette chooses to die. Siegfried chooses to die with her and they leap into the lake. This breaks Rothbart's spell over the swan maidens, causing him to lose his power over them and he dies. In an apotheosis, the swan maidens watch as Siegfried and Odette ascend into the Heavens together, forever united in love.

Act 1: Prince Siegfried, his friends, and a group of peasants are celebrating the Prince's coming of age. Siegfried's mother arrives to inform him that she wishes for him to marry soon so that she may make sure that he does not disgrace their family line by his marriage. She has organised a ball where Siegfried is to choose his bride from among the daughters of the nobility. After the celebration, Siegfried and his friend, Benno, spot a flock of flying swans and decide to hunt them.

Act 2: Siegfried and Benno track the swans to a lake, but they vanish. A woman wearing a crown appears and meets the two men. She tells them that her name is Odette and she was one of the swans they were hunting. She tells them her story: Odette's mother, a good fairy, had married a knight, but she died and the knight remarried. Odette's stepmother was a witch who wanted to kill her, but her grandfather saved her. Odette's grandfather had cried so much over the death of Odette's mother that he created the lake with his tears. Odette and her companions live in the lake with Odette's grandfather, and can transform themselves into swans whenever they wish. Odette's stepmother still wants to kill her, and stalks her in the form of an owl, but Odette has a crown which protects her from harm. When Odette gets married, the witch will lose the power to harm her. Siegfried falls in love with Odette but Odette fears that the witch will ruin their happiness.

Act 3: Several young noblewomen dance at Siegfried's ball, but the Prince refuses to marry any of them. Baron von Rothbart and his daughter, Odile, arrive. Siegfried thinks that Odile looks like Odette, but Benno doesn't agree. Siegfried dances with Odile as he grows more and more enamored with her, and eventually agrees to marry her. At that moment, Rothbart transforms into a demon, Odile laughs, and a white swan wearing a crown appears in the window. The Prince runs out of the castle.

Act 4: In tears, Odette tells her friends that Siegfried did not keep his vow of love. Seeing that Siegfried is coming, Odette's friends leave and urge her to go with them, but Odette wants to see Siegfried one last time. A storm begins. Siegfried enters and begs Odette for forgiveness. Odette refuses and attempts to leave. Siegfried snatches the crown from her head and throws it in the lake, saying "Willing or unwilling, you will always remain with me!" The owl flies overhead, carrying away the crown. "What have you done? I am dying!" Odette says, and falls into Siegfried's arms. The lake rises from the storm and drowns Odette and Siegfried. The storm quiets, and a group of swans appears on the lake.

Many different endings exist, ranging from romantic to tragic.

In 1950, Konstantin Sergeyev staged a new Swan Lake for the Mariinsky Ballet (then the Kirov) after Petipa and Ivanov, but included some bits of Vaganova and Gorsky. Under the Soviet regime, the tragic ending was replaced with a happy one, so that in the Mariinsky and Bolshoi versions, Odette and Siegfried lived happily ever after.

In the version danced today by the Mariinsky Ballet, the ending is one of a "happily ever after" in which Siegfried fights Rothbart and tears off his wing, killing him. Odette is restored to human form and she and Siegfried are happily united. This version has often been used by Russian and Chinese ballet companies. A similar ending was used in The Swan Princess.

In the 1986 version Rudolf Nureyev choreographed for the Paris Opera Ballet, Rothbart fights with Siegfried, who is overcome and dies, leaving Rothbart to take Odette triumphantly up to the heavens.

In a version which has an ending very close to the 1895 Mariinsky revival, danced by American Ballet Theatre in 2005, Siegfried's mistaken pledge of fidelity to Odile consigns Odette to remain a swan forever. After realizing that her last moment of humanity is at hand, Odette commits suicide by throwing herself into the lake. The Prince does so as well. This act of sacrifice and love breaks Rothbart's power, and he is destroyed. In the final tableau, the lovers are seen rising together to heaven in apotheosis.

In a version danced by New York City Ballet in 2006 (with choreography by Peter Martins after Lev Ivanov, Marius Petipa, and George Balanchine), the Prince's declaration that he wishes to marry Odile constitutes a betrayal that condemns Odette to remain a swan forever. Odette is called away into swan form, and Siegfried is left alone in grief as the curtain falls.

In the 2006 version by Stanton Welch for Houston Ballet, also based upon Petipa and Ivanov, the last scene has Prince Siegfried attempting to kill Rothbart with his crossbow, missing and hitting Odette instead. Odette falls, Rothbart's spell now broken, and regains human form. The Prince embraces her as she dies, then carries her lifeless body into the lake, where he also drowns himself.

In a version danced by San Francisco Ballet in 2009, Siegfried and Odette throw themselves into the lake, as in the 1895 Mariinsky revival, and Rothbart is destroyed. Two swans, implied to be the lovers, are then seen flying past the Moon.

In a version danced by National Ballet of Canada in 2010, Odette forgives Siegfried for his betrayal and the promise of reconciliation shines momentarily before Rothbart summons forth a violent storm. Rothbart and Siegfried struggle. When the storm subsides, Odette is left alone to mourn the dead Siegfried.

In the 2012 version performed at Blackpool Grand Theatre by the Russian State Ballet of Siberia the Prince drags Rothbart into the lake and both drown. Odette is left as a swan.

In Hübbe and Schandorff's 2015 and 2016 Royal Danish Ballet production, Siegfried is forced by Rothbart to marry his daughter, after condemning Odette to her curse as a swan forever by mistakenly professing his love to Odile.
显示全部